From an early age, we’re told of the importance of fluids, and hopefully by now, each of us understands this and lives accordingly on a daily basis. What can we expect of our precious little engines from a performance and durability standpoint if we don’t, in fact, attend to their fluid needs each day?

And how can we be sure that we’re feeding them the proper products?

Certainly it was easier before all the special formulations came along. The offerings have increased drastically from a time not that long ago when just a few variations were available and a trip to the store to stock up was not nearly as complicated. Though we may need a bigger shopping cart these days, it’s quite possible to make it home successfully with some nice new products that really pay off in the long run.

Supplying an engine with the proper quantity of oil is the first step in getting any engine started in what one hopes will be a long and successful life.

The primary need for oil remains the same as it has always been: to keep two moving surfaces separated. In doing so, performance is enhanced (through reduced friction) and durability is basically assured as the two surfaces will not be touching each other — at least not on a regular basis. An additional benefit is preventing corrosion of the now saturated components.

There are also two secondary needs for oil. The first is to control contamination by keeping unwanted materials isolated in the oil until the proper time to deal with them. The second is to “control” heat — or, more accurately, to “manage” heat — by capturing it at various points and distributing it throughout the engine. It’s always helpful to remember that the oil system is an important ally, along with the actual cooling system, in keeping engine temperatures where they need to be. To that end, the purer the oil, the better it will be in assisting with this critical function.

So, just what does one need to know these days to take full advantage of the newest oils?

One of the most significant things to keep in mind is that the oil blenders — bless their stubborn little hearts — continue to insist that the newest legacy variation, which happens to be CK-4, is fully backwards compatible with everything that preceded it.

Determine the required viscosity (with 10W-30 and 15W-40 being most common) for a given engine and the operating conditions (temperature) expected and, if the oil has gotten that wonderful American Petroleum Institute-licensed CK-4 designation, you’re good to go. 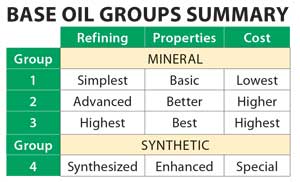 The oil packagers (suppliers) work from four base stock categories these days. These range from Group 1, which is the simplest (mineral) petroleum, through Group 4, the “highest or best” and a synthetic. But, if they have put together a product that meets the category, it’s good stuff. It could be simply drawn from Group 1 or — as the operational challenges increase, for example, with lighter viscosities — it might be necessary to use more from the synthetic side.

Recall the early days of the introduction of advanced oils, when basic mineral oils dominated and the synthetics just started to muscle in. The earliest synthetics were truly 100 percent synthetic with a price to match. These days, we’re in a sweet spot of nice compromise products, which include semi-synthetics and synthetic blends.

The takeaway is that the companies putting these products into pretty packages on the shelf — with the proper base stock and crucial additive package — will take care of the important concerns mentioned earlier about what the oil does for the engine.

This actually seems easy, yet, as we’re about to check out with all our oil needs satisfied, something shiny catches our eye. A whole new category — FA-4 — doing its best to catch our attention.

Well, remember that whole legacy aspect and backwards compatibility talk? The diesel engine folks did finally decide to develop something entirely new, in the interest of efficiency (fuel economy) primarily. They are now introducing this new category and looking for full adoption and commercial acceptance.

In the interest of understanding why they’ve been developed, think of these as overall “thinner” oils than CK-4. An FA-4 10W-30 is essentially “thinner” than a CK-4 10W-30. Yes, I meant to say that. They’re blended from the low side of the viscosity chart and also have lower kinematic viscosity ratings, which relate to the internal friction.

Logically, if FA-4 is not specifically prescribed for a particular engine — having been fully confirmed by the engine company as meeting operational and durability requirements — it should not be used in one of those particular engines. I meant to be very clear about that. The adoption of FA-4 also varies by the individual engine company, with most only allowing for usage in the most current engines.

These days, the new FA-4 stuff is mainly for on-road trucks that have been designed to use it. If one’s family of products includes a limited number of these, and one does not wish to develop a problem because some of the new thinner stuff was accidentally used in a legacy product, it’s generally acceptable to use the “older” oil in the newer machines. The incremental fuel savings of this new oil may be important to operators, depending on the nature of their particular business. But adoption has been slow despite it being used as factory fill by a number of the engine and vehicle companies. What often happens is at the first oil change, they (the folks dealing with oil changes every day) revert to the readily available older stuff and they never give a further thought to the new stuff.

With this understanding, as to the current robust status of the diesel engine oils available in the marketplace, what are some additional thoughts?

A first would be to remember that oil works best when it’s fresh, has not been contaminated too much and the additive package has not been depleted too much. These days, with the latest oils, that depletion can take quite some time. But when oil has served its purpose and needs to be retired, it’s important that a change is done in a timely manner.

A second consideration might be that previous oil change intervals can be extended with these better oils (assuming that the filtration is of sufficient capacity to last through the longer interval). With careful testing of the used oil, this can be confirmed and it’s worth checking into. If you do pursue this, don’t panic if someone might say with a smile, “No problem, but first we’ll need a sample from you …” Remember, it’s the oil that they’re actually interested in.

How Good a Fuel is Propane for Drilling Jobsites?

On Drilling Jobs, Diesel Is Common, but Don’t Forget Gas

How Do I Pick the Best Coolant for My Diesel Engine?

John Fischer is a consultant on all things engine related. Reach him at johnengine@earthlink.net.

Tips to Optimize Input and Output of Modern Diesel Engines

How Do I Pick the Best Coolant for My Diesel Engine?

How to Get the Most Life from a Diesel Engine