How Does Graphite Affect Conductivity of Geothermal Wells?

The use of graphite in thermally-conductive grouting applications has exploded in recent years with more and more drillers abandoning the use of sand either completely or partially. Some of this greater interest has been due to economics and some to labor reduction or worker safety issues. In this article, I will discuss the benefits and some of the potential trade-offs between using graphite versus sand in geothermal heat-loop grouting.

For those who may not be familiar with graphite or its use in ground-source heat pumps, here is a quick primer. We most commonly find graphite in standard pencils. The “lead” is actually graphite mixed with clay to harden it. The pencil mark is composed of thin layers of graphite laid down on the paper when we press down. It may at first seem strange that such a material can be used to increase thermal conductivity in grouts. However, crystalline-carbons conduct both heat and electricity and, of these, graphite is the softest type and is economical.

Graphite is a form of crystalline carbon in which the individual atoms are arranged in sheets, rather than in a three-dimensional lattice (like diamond) or in hollow tubes and spheres (like fullerenes). The sheets look something like honey-combs with six individual atoms arranged in rings that join together in the x-y axis. Each graphite carbon atom is joined to three other carbon atoms. Pure graphite has no bonding between layers. The layers can slip easily past one another. In contrast, coal is a form of carbon in which the carbon atoms are not arranged into any set pattern. This lack of arrangement is often referred to as being amorphous. Coal also contains significant amounts of non-carbon impurities such as sulfur, nitrogen and hydrogen, whereas graphite, diamond and fullerenes are much more pure.

Graphite can be mined or produced synthetically using extreme heat. For the purposes of geothermal heat loops, both sources work exceptionally well for conducting energy, but not all are economically sensible. The purity of synthetic graphite can approach 99.9 percent or even higher for some pyrolytic or vapor-deposited forms. This level of purity is expensive and not necessarily advantageous for our purposes. Even an 80-percent pure graphite will still conduct heat far better than any silica sand.

All graphite is extremely conductive of thermal energy in the x-y plane (or across its widest face). In this direction, naturally mined graphites are often capable of achieving 120 to 200 Btu/hr.-ft°F, but only 1.75 or so Btu/hr.-ft°F in the z-axis, or across the flake’s thickness.

Now, it is important to remember that the maximum thermal conductivity that we are likely to encounter in most soils is about 1.4 Btu./hr.-ft°F. (2.41 W/m°K), which is much lower than the values for most graphites. Even pure, rock-quartz only has a thermal conductivity value of perhaps 4.87 Btu/hr.-ft°F and the value for silica sand is below this, between 2.2 to 3.5 Btu/hr.-ft°F. With such wide discrepancies between what sand and graphite can achieve, we see why so little actual graphite is needed.


How We Use Graphite in Ground-Source Heating

Graphite is dosed into a standard bentonite-based grout in much the same way that we currently use sand, but at much lower amounts. That’s about it. Where 400 pounds of sand might be added to each bag of grout, we would require less than 25 pounds of graphite. The graphite is typically added to the grout mixture after the bentonite is allowed to hydrate.


What are the Benefits that Graphite Offers Over Sand?

So it is common to ask, why switch to graphite when sand has been working just fine for decades? Here are five reasons:

By adding graphite to a bentonite grout, it is possible to create thermal conductivity values that are higher than any soil or rock that drillers are likely to encounter in the field. A mix of 400 pounds of sand with as little as 24 pounds of graphite will give values that are higher than most portable thermal conductivity equipment can even measure. Pictured with this article is a graph with some typical thermal data. Graphite loading increases as you move to the right, from none to 30 pounds per batch. Note that this particular graphite type is only middling in performance and others can provide more or less benefit per dosage. 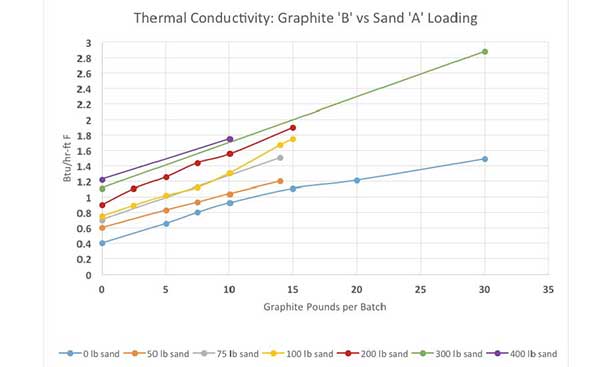 So, what makes for a good graphite in a geothermal application? While higher carbon purity can certainly give higher thermal conductivity values, what ultimately matters more is the size and shape of the flake. In general, we want wider, flatter flakes as long as they do not negatively affect the pumping and placement of the grout.

Most of the graphite flakes used in geothermal applications will be between 1 to 5 millimeters in diameter (or larger). In general, the larger the average flake size, the less graphite is required to meet a particular thermal conductivity value. There can be a trade-off, however, in that really large flakes cause some pumping and mixing issues. These huge flakes can act like tiny sails, constantly getting caught up with other graphite flakes and clumping together. On the flip-side, smaller flakes not only produce lower thermal conductivities, but also require more water to wet their surfaces. The use of fine graphite can lead to dramatic increases in grout viscosity. Simply thinning out the grout to decrease viscosity may give better yields, but it increases permeability, lowers thermal conductivity, decreases set-strength and provides less suspension for added solids like sand. 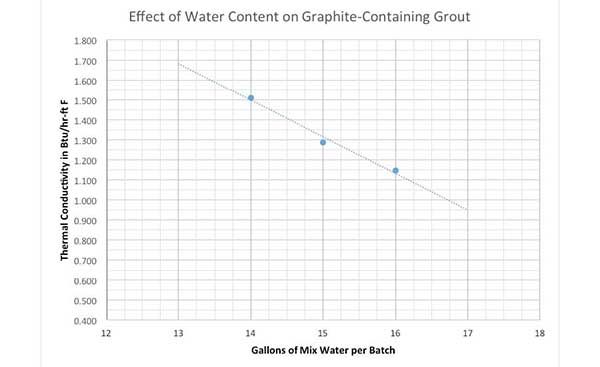 Because graphite has such a very high thermal conductivity potential and because we use so little in each batch, any variation in dosage can have dramatic effects on the measured TC values. Modifying the water content by as little as one gallon per batch can modify the TC values by roughly 15 percent. For mixes that rely on even less graphite, the difference can be even greater.


Advantages of Sand with Graphite

The cost of graphite, pound-for-pound is greater than sand, but the thermal benefits that it offers tend to equalize the down-hole price. In some cases, graphite alone actually offers the most economical alternative. Oftentimes, though, the most cost-effective option is actually to blend sand and graphite. The dosage of graphite can be cut in half or better when sand is added. For example, in order to hit a 1.2 Btu/hr.-ft°F thermal conductivity value, a common recipe calls for adding one bag of graphite to one bag of bentonite-based grout. It is also possible to meet the same 1.2 Btu/hr.-ft°F spec using a half-bag of graphite with 100 pounds of sand. Depending on the delivered cost of sand (and availability of quality types), this blended approach is usually more cost effective (per cubic foot) than using sand alone and roughly three-quarters of the cost of using the full bag of graphite alone.


Any Concerns with Choosing Graphite Over Sand?

Graphite has a couple of important considerations associated with its use. First of these is graphite options are finely sized or contain portions that are powdery. These fines can create black, dusty plumes in the air. The dust is messy, midnight black and light enough to get into everything including equipment and workers clothes. Very fine graphite particles not only produce excessive dust, but also produce lower thermal conductivity and increase viscosity of the grouts. This can be avoided by using commercial graphite carefully selected for geothermal drilling utilizing a particle size range that minimizes fines.

Dust clouds are an important concern because graphite dust is potentially combustible, as well as an electrical-arc hazard. Care should be taken to only use graphite outdoors or in a well-ventilated area. It is also very important to minimize the use of spark and flame producers near graphite mixing. Correct use of dust masks can minimize inhalation of any graphite dust.

Lastly, there are situations where adding a whole lot of solids is a major benefit. When grouting in vadose zones or other areas where the soil has a tendency to dry out, increasing the solids content of the grout with sand can greatly reduce shrinkage and cracking. A combination of sand and graphite can also be used effectively if higher thermal conductivity values are required.

The increased availability of graphite for geothermal grouts provides engineers and contractors more flexibility when grouting boreholes. The variation of dosages with bentonite grout and graphite, or in conjunction with sand, allow for a suitable geothermal grout for every ground type.

Michael Kleespies is general manager–drilling for CETCO Drilling Products, a Mineral Technologies Inc. company.
You must login or register in order to post a comment.