How often, when drilling a water well, do you think of source protection? Yes, it is the law to follow all state and local regulations. However, besides those regulations, what else do you consider before installing a well? What about unforeseen contamination caused by runoff, flooding or man? We know that if the well was correctly installed, following all state and local regulations, there is no need to worry about future contamination … right?

Regulations are designed to stop known contaminants from infecting the wellbore. Before drilling a well, we must consider what other unknown variables of contamination could have a negative impact on the well. Remember, Mother Nature did an excellent job of creating source protection, and then our disruptive drilling process destroyed it. We follow that disruption by installing a permanent shaft that can efficiently deliver contaminants directly to the production zone. Therefore, it is our responsibility as drillers to look for all potential hazards to a well and work to minimize risk to the aquifer.

And minimizing that risk starts with a proper site assessment. The site assessment should begin by asking the customer about the proposed well location. Next, ask the customer if the property has been reclaimed in any way. Reclaimed properties could have abandoned structures buried on site, along with old septic systems and cisterns. The final question to ask the customer is if they know of any potential sources of contamination — be they man-made or from Mother Nature, like flooding or runoff. A basic site assessment goes a long way in preventing groundwater contamination. Here we discuss two situations where all regulations were followed, but a thorough site assessment would have made all the difference.

Last fall, I was asked to investigate a new water well that had been contaminated with petroleum. The well was drilled using conventional mud rotary. The driller followed all state regulations and best practices for drilling. The well was 82 feet deep and 20 feet to static water. The 10-foot screen was set just below a 2-foot clay seam in a coarse sand and gravel production zone. The well log consisted of mostly sand and gravel drift with some small layers of clay. It was a new well for a new home; however, what I did not know at the time was it was a new home on an old farm. The farm once had a house that was torn down, and the rubble was pushed into the basement and covered with backfill. 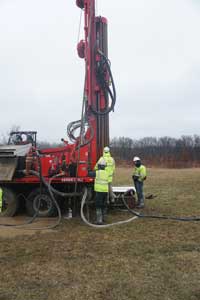 Before mobilizing, drilling contractors need to know as much about the site as possible.

The new well was staked and drilled unintentionally near the old farmhouse foundation. It was in a location that met all regulatory isolation distances from known sources of contamination. But there was no way to know that the well location was on the former farmhouse. I asked the driller what he encountered when drilling the first 20 feet. He said there had been some broken rock, trash and broken glass. The property owner then mentioned the property had been his grandparents’ farm and that the old farmhouse used to be in the vicinity, but he did not believe it was right there. Now the picture came into focus.

Excavation of the area found remnants of a rock foundation, broken glass and a smashed 300-gallon fuel oil tank that was 8 feet from the new well. Amazingly, there was still fuel in the tank! The soil around the tank was discolored and smelled like fuel. Now that we understood the source of contamination, we needed a suitable solution, which was to remediate the site and well. The contaminated area was removed, and the well was properly abandoned. A new well was drilled 350 yards away.

The driller did everything by the book and, sadly, the book did not explicitly say look for buried farmhouses with partially filled fuel oil tanks. We must condition ourselves to take some extra time and ask, “What else could I encounter subsurface?” The top 20 feet of drilling is crucial in telling a driller if the soil is native undisturbed or disturbed soil with a human-made obstruction.

The second situation happened to one of my good friends a few weeks ago. I saw on social media that he had the flu for the third time in three months, so I called to check on him. He sounded miserable on the phone and, to make his situation worse, he mentioned his dog was sick too. He went on to explain that his dog, Morty, had gotten Giardia and was on medicine from the vet. The vet believed the dog had gotten the parasite by eating other dogs’ feces while playing at a dog daycare. That statement got me thinking. 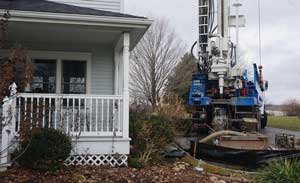 A good source protection plan starts with state and local regulations, but also takes into account the customer’s site. That includes earlier uses of the site, as well as considerations of worst-case scenarios (like floods) that could happen to the area.

Contracting the flu multiple times during the worst flu season on record and dogs eating feces are very plausible situations for any homeowner. However, significant weather events in the past nine months have flooded most of the United States. The last thing on a homeowner’s mind in a flood situation is if there’s any impact to their well. His home had experienced two 100-year flood events in six months. The first was in October 2017 and then again in February 2018. My friend’s well was built following proper regulation, including the wellhead meeting above-grade standards. However, the significant flooding event covered his well with surface water. After the flooding, waterborne pathogens started growing in his well, and in six months, had developed a colony strong enough to make both him and his dog sick.

Microorganisms in tap water are not something our customers consider when they get sick. Often, they believe the symptoms are from the flu or food poisoning. When I travel internationally, I carry a broad-spectrum antibiotic just in case I get sick from local microorganisms in the water. Even the most cautious of travelers end up being exposed through ice cubes or even water used to wash vegetables. These antibiotics have saved my behind — literally — many times.

My buddy just thought he was unlucky and never considered his well might be contaminated. The solution started as a simple and easy fix. Improve the sanitary seal of the well by raising the wellhead above the flood levels. Then perform mass sanitation of all the plumbing and well. The company he contracted to make the wellhead improvements and perform the sanitation job underestimated the volume of chlorine required and the contact time needed to kill off the bugs downhole. A second water quality test showed it was still positive for microorganisms. The local health department suggested a pH-adjusted chlorination with 72 hours of contact time. That did the job, and the third water test came up negative for any waterborne pathogens.


Size Up the Site

In both situations, the drilling companies could not foresee that source contamination would be possible without taking the extra steps of site assessment. Once a well is contaminated, proper diagnosis of the impurity and a swift solution can help prevent further damage to the well and groundwater. When any pollutant negatively affects groundwater, it is crucial to report the situation and follow all state and local regulations. Source protection starts with fully understanding the wellbore location and taking into consideration all known and unknown contaminants. A proper site assessment and asking relevant questions can help you learn about unknown pollutants.

Our state and local regulations give us a reliable baseline for protecting water wells. Selecting the best drilling method for the formation, and utilizing NSF-approved products for well construction and full-interval grouting from bottom to top, will prevent water contamination. A thorough source protection plan will first consider all local regulations. Next, it will take into account the customer site assessment along with area geology, well construction methods, significant weather events, emerging pollutants and human error. Excellent source protection starts at preplanning and ends many years later when the well is abandoned.

Drilling expert Brock Yordy is a regular The Driller contributing writer. If you have a question for Ask Brock, contact him at 269-348-5156 or questions@askbrock.com.