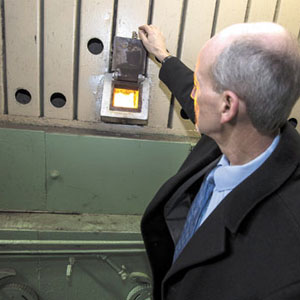 Jim Lowe, director of engineering, construction and operations, watched the historic final coal shipment. He’s overseen the $80 million geothermal project — consisting of 3,600 boreholes feeding the system that heats and cools 47 buildings on campus — since the first hole was drilled in 2009.

“It has been incredible to witness the progress over the last few years,” Lowe says. “I think we’ll realize the full extent of the changeover from consuming about 36,000 tons of coal a year to renewable energy when the two smoke stacks come down in 2015.”

The work to be completed includes finishing the system’s south borehole field, modifications to the South District Energy Station to accommodate the two new 2,500-ton heat-pump chillers, hot and chilled water distribution looping, and modification of the remaining buildings (predominately on the south side of campus) to accept the geothermal connections.

Lowe notes that when the system is complete next year, the shift from fossil fuels to a renewable energy source will reduce the university’s carbon footprint by nearly half while saving $2 million a year in operating costs.

The Earth’s ability to maintain a constant temperature supports the thermodynamic principle for the geothermal system’s operation. A ground source heat pump coupled with a vertical closed loop piping system uses the Earth as either a heat source, when operating in heating mode, or a heat sink, when operating in cooling mode.

Phase 1 was completed in 2012. It consisted of two borehole fields, construction of the North District Energy Station and connecting buildings on the northern part of campus to the new distribution system.

“When costs began to escalate for the installation of a new fossil fuel burning boiler, the university began to evaluate other renewable energy options,” Lowe says. “This led to the decision to convert the campus to a more efficient geothermal-based heating and cooling system.”

Federal and state officials have endorsed Ball State’s foray into renewable energy. The U.S. Department of Energy provided a grant of $5 million under the American Recovery and Reinvestment Act. The Indiana General Assembly authorized nearly $45 million in state capital funding for the first phase. In 2013, the Indiana General Assembly authorized a $30 million cash appropriation for the second phase.

The project has caught the attention of universities and communities across the nation. Lowe is sharing information about the university’s new operation with others who want learn how they, too, can benefit from a geothermal system.

“The geothermal project provides research opportunities for faculty, and by creating a sustainable university, we can provide a learning environment for students,” Lowe says. “This project further demonstrates that we practice what we teach.”