Drilling has a long, storied history. Scroll down to see our timeline of drilling history, where we revisit the birth of important technologies and methods.

The first documented spring-pole well in America was drilled in 1806 by David and Joseph Ruffner in West Virginia. It reached 58 feet in depth, containing 40 feet of bedrock. The project lasted two years.

First natural gas well in the U.S. William Hart dug the well after noticing gas bubbles in a creek near Fredonia, N.Y. 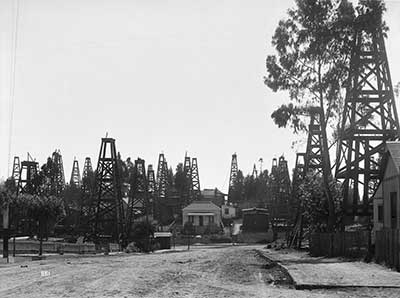 A patent to L. Disbrow for the first four-legged derrick was given, originally in 1825 and then elaborated on in 1830. The structure consisted of legs made of square timber wood. The girts were mortised and inserted into the wooden legs with keys so the structure could be dismantled.
Photo source: California Historical Society / Creative Commons

Men in Kentucky were drilling an exploratory well for salt brine. Instead, they hit an oil well. The pressure of the gas and oil underneath the surface forced an enormous geyser into the air. This was noted to be America’s first oil well (although there are some disputes to this claim). 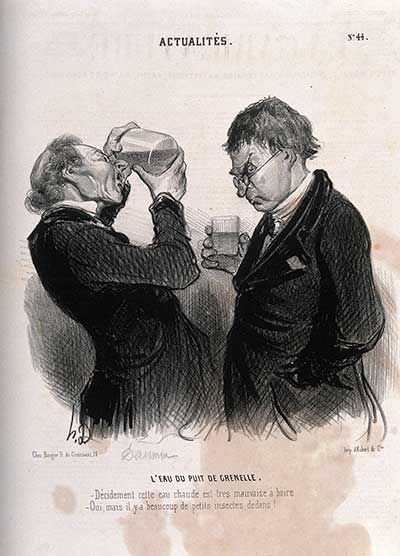 The Grenelle well in France was reached by a dry rotary auger method. It was drilled to 1,771 feet and took eight years.
Photo source: Wellcome Images / Creative Commons

The French engineer Pierre-Pascal Fauvelle was the first to utilize water circulation in drilling. Using the new method, he drilled 560 feet in 23 days.

Invention of the rotary drill

The first rotary drill was invented by Englishman Robert Beart.

Invention of the
mechanical percussion drill 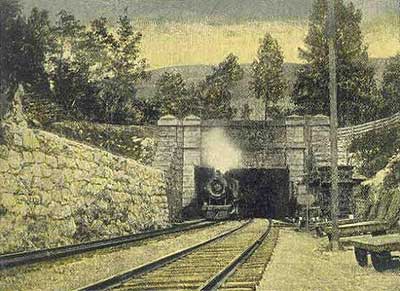 J.J. Couch invented the first mechanical percussion drill, which he later perfected with the help of fellow inventor J.W. Fowle. Steam was admitted alternately to each end of a cylinder. The drill was thrown like a lance at the rock on the forward stroke, caught and then drawn back on the reverse stroke, and then thrown again. It was the first drill that did not depend on gravity. It went to work on the Hoosac Tunnel project, which bored a passage for trains through hills near North Adams, Mass.
Photo source: Creative Commons 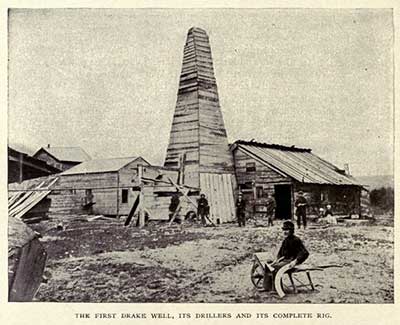 George Bissell and Edwin L. Drake made the first successful use of a drilling rig on a commercial well drilled especially to produce oil in Pennsylvania. They drilled to 69 feet.
Photo source: Public Domain

In June, J.C. Rathbone drilled a discovery well to 140 feet using a steam engine on the banks of the Great Kanawha River in the Charleston, W.Va., area. The well produced about 100 barrels of oil a day.

Invention of the
diamond core drill 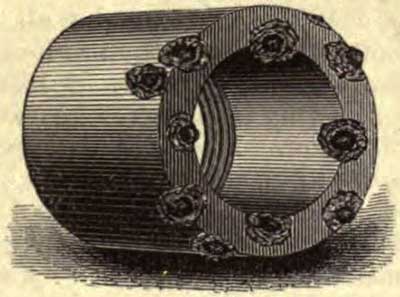 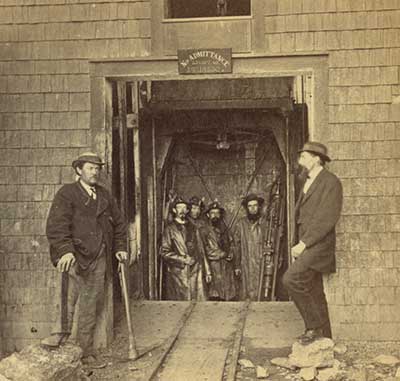 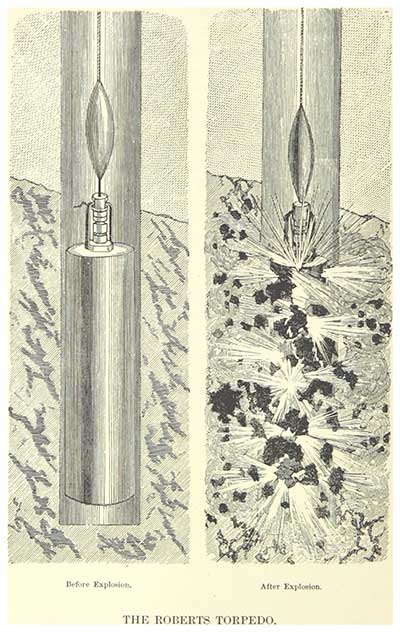 Edward A.L. Roberts was awarded a patent in November 1866 for what would become known as the Roberts Torpedo, a device for increasing the flow of oil by using an explosion deep in a well. The new technology revolutionized the young oil and natural gas industry by increasing production from individual wells.
Photo source: Public Domain 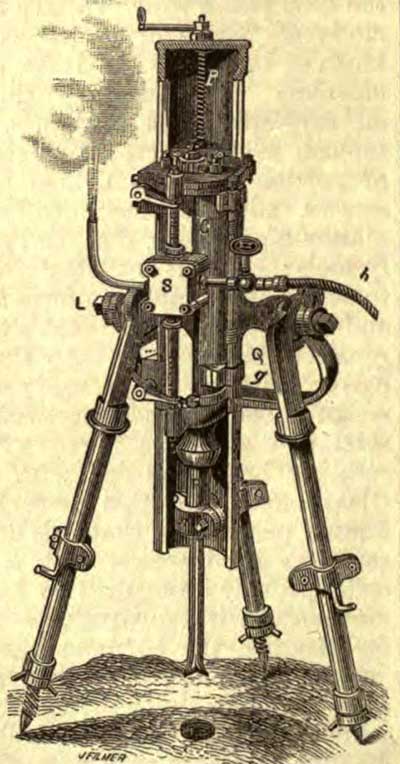 Simon Ingersoll received a patent for a rock drill on a tripod mount. The drill was designed for mining and tunneling. It enabled the operator to drill at virtually any angle. He formed Ingersoll Rock Drill to capitalize on this invention, a company that is a precursor to Ingersoll-Rand.
Photo source: Public Domain

John Vivian was given the first U.S. patent for a diamond drill. While other drills before its time bored holes through a succession of blows, this invention allowed the core to remain intact. This made it very valuable for prospectors.

The Bucyrus Foundry and Manufacturing Company was founded in Bucyrus, Ohio. The company later became famous in the drilling industry as Bucyrus-Erie, a maker of cable-tool rigs, but it was an early producer of steam shovels. It supplied many of the steam shovels used in the building of the Panama Canal.

Brothers M.C. and C.E. Baker drilled the first well with rotary equipment. They pumped water with a windmill in Yankton, Dakota Territory. 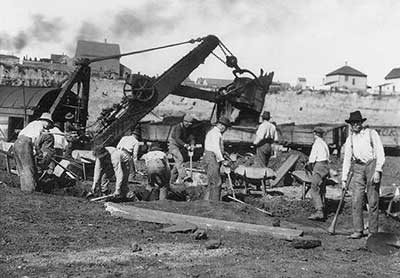 John Smalley Campbell issued the first U.S. patent for the use of flexible shafts to rotate drilling bits. The patent was for dental applications, but was broad enough to cover larger scales, such as those used now in horizontal oil wells.

Invention of the calyx drill 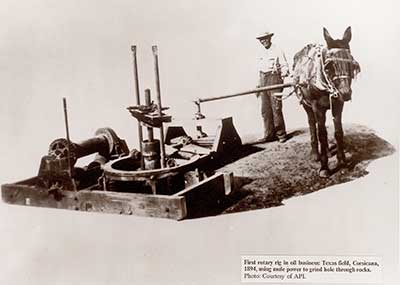 The Baker brothers were using their rotary method for oil well drilling in the Corsicana field of Navarro County, Texas. Their rig was powered by a mule.
Photo source: Public Domain

First use of drilling mud

Drillers at Spindletop, including brothers Curt and Al Hamill and Peck Byrd, noticed that muddied-up freshwater could help stabilize a formation and prevent borehole collapse. They started circulating it and drilling mud was born. 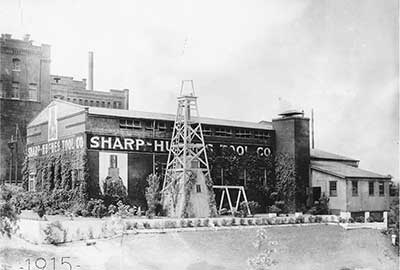 Inspired by the success of Spindletop and what it meant for the future of oil drilling in Texas, Howard Hughes Sr. and Walter Sharp founded the Sharp-Hughes Tool Company. The Hughes name lives on today in the name of the company Baker-Hughes.
Photo source: Public Domain

Howard Hughes Sr. and Walter Sharp introduced the Sharp-Hughes Rock Bit, which was nicknamed the "rock eater." It was suited for deep boring through medium and hard rock.

The Supreme Court of the United States ruled that Standard Oil, which at the time controlled more than 90 percent of U.S. production, was a monopoly and that the company must be broken up to create competition in the market.

The rotary table and kelly were first used. The primary function of the rotary table was to transmit torque to the drillstring via the kelly, a section of pipe with a square cross-section that slotted through a similar shape on the rotating table.

Introduction of the sub

Innovations to
the rotary table 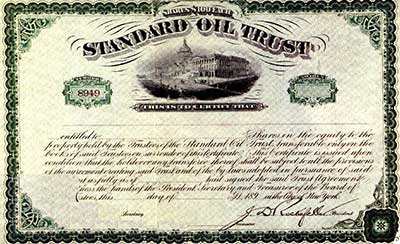 Victor York and Walter G. Black of Standard Oil Company of California were granted a patent for driving the rotary table with a shaft. This innovation guaranteed the ongoing success of the rotary drilling method.
Photo source: Public Domain

Invention of the portable seismic rig

The rotary drilling method was improved with the use of diesel power. 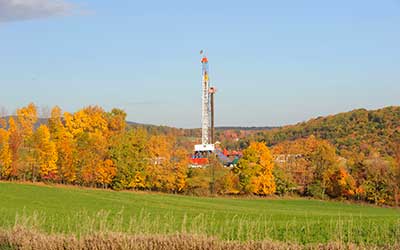 The first true horizontal oil well was drilled near Texon, Texas. By the early 1980s, with advancements in drilling motors and steering, the technology finally became widespread.
Meredithw / English Wikipedia 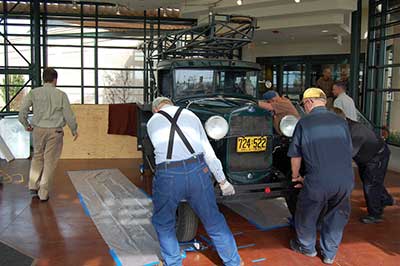 George E. Failing introduced the first portable rotary rig to the industry. The idea first came after he mounted an existing rig on a 1927 Ford farm truck, adding a power take-off assembly to transfer power from the truck engine to the drill. The new portable rotary rig could drill ten 50-foot-deep holes in a day.
Photo source: Cherokee Strip Regional Heritage Center

Cal Talc, A. J. Lynch and National Pigment Chemical merged to form Baroid Sales Company. The new company, founded to serve the growing market for products for hydraulic rotary drilling, is based in Los Angeles.

Invention of the Marsh funnel

Harlen Marsh of General Petroleum Company invented the funnel that carries his name. He donated the concept for the device, which measures relative viscosity of drilling fluid, to the drilling industry.

Introduction of the cantilever drilling mast 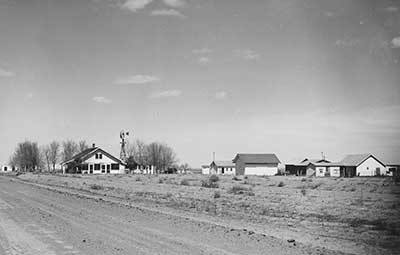 The Hughes Tool Company's patent on the tricone drilling bit expired, setting off a flurry of activity as competitors entered the market.

In June, the New York State Natural Gas Corporation abandoned a project after having drilled the world's deepest cable-tool well to a depth of 11,145 feet. The well was located in Van Etten, N.Y. The project started five years earlier.

Longyear applied for a patent for the first wireline core retrieval system. 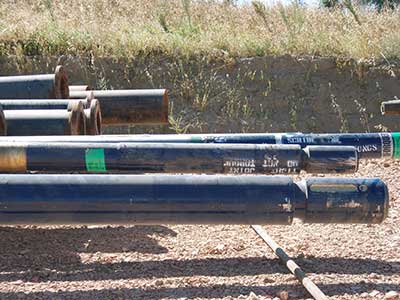 The first downhole drilling motors, or mud motors, were designed and manufactured by Dyna-Drill. The motor was based on the 1930 Moineau design for progressive cavity pumps.
Photo source: Joshua Doubek / Wikimedia Commons

The Organization of Petroleum Exporting Countries (OPEC) was founded.

A Bucyrus-Erie 50-R was instrumental to the rescue of two miners who survived the Sheppton, Pa., mining disaster. 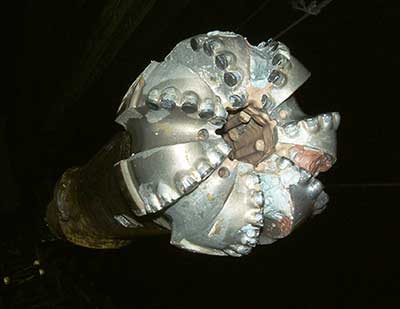 General Electric Research Lab (GE) introduced a new synthetic material made of diamond grains sintered together with cobalt. This new material, Compax, could be made into various shapes and retained diamond’s natural property of extreme hardness, but not its weak cleavage planes. To make a cutter, a thin layer of the synthetic diamond material was deposited onto a disk-shaped tungsten carbide substrate so that the assembly, called a “compact,” could be attached to the bit. Bits with this kind of cutter are generically called PDC bits.
Photo source: Geolina163 / Wikimedia Commons

Teleco Oilfield Services Inc., together with the U.S. Department of Energy, introduced mud pulse telemetry, now a widely used method of transmitting measurement while drilling data to the surface. Commercialized in 1978, the technology had been under development since the late 1960s. Data transmitted by pulses, together with trigonometry, can give operators a three-dimensional plot of the well being drilled. Pulse telemetry improved on the slower process of wireline logging. Teleco was later acquired by Baker Hughes. 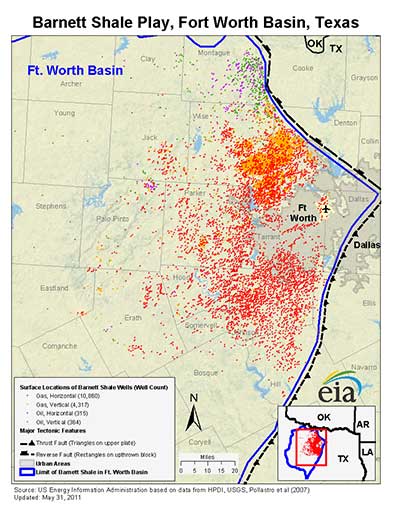 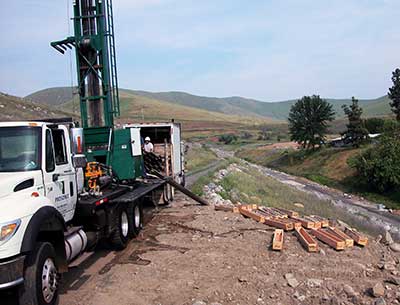 The Versa-Sonic drill rig was put into operation. Versa-Drill International Inc. and Bowser-Morner built this rig that incorporated Ray Roussy’s new sonic drill head. Roussy had worked to improve and perfect the technology over more than 20 years from original designs, which modified oscillators for drilling purposes. Sonic drills, like this one used by the Army Corps of Engineers, are now widely used for sampling.
Photo source: U.S. Army Corps of Engineers Sacramento District

Professors at Texas Tech University developed “zipper fracking,” which is when operators drill two wells side by side. The process allowed both wells to produce more oil and gas. 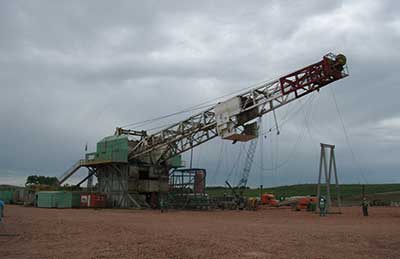 Advancements in drilling technology moved rapidly in five years, as 16,000-foot wells were taking an average of 32 days to drill. By 2013, the average drill time for 21,000-foot wells was 18 days or less.
Photo source: Joshua Doubek / Wikimedia Commons